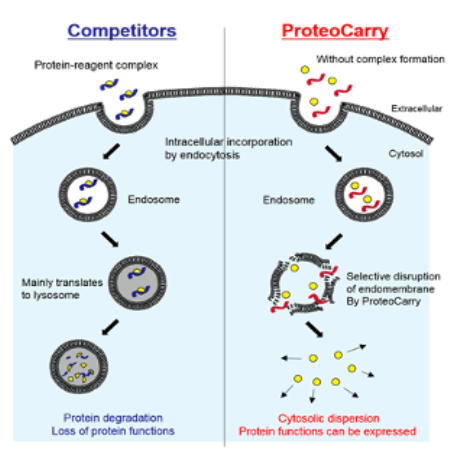 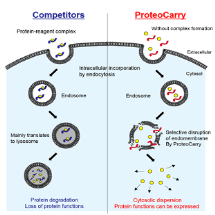 ProteoCarry is a novel peptide-based transfection reagent for exogenous proteins such as functional proteins and antibodies with highly efficiency of cytosolic delivery. Protein transfection, intracellular delivery of proteins, is a powerful method to analyze cellular response to the protein of interest. While plasmid-based gene expression generally needs 12-24 hours to express proteins well, protein transfection reagents can immediately import functional proteins into living cells within several hours.

Although many protein transfection reagents including peptide-, cationic lipid- and polymer-based compounds have been developed to date, these reagents struggle to deliver proteins into “cytosol”. Commonly these reagents interact with
protein to form complexes and subsequently protein-reagent complexes are entered into cells via endocytosis pathway. But protein-reagent complexes are able to escape endosomes with little efficiency and consequently transported to lysosomes to be degraded. Highly effective endosomal escape of proteins is the most important subject of protein transfection reagents.

About protein transfection reagent and issue of conventional one
Protein transfection reagent has been widely used as it can deliver proteins faster than inducing proteins by gene transfer.
Many reagents have been developed so far, such as peptide-base, cationic lipid-base, and polymer base. Proteins transfected by such reagents generally form complex with proteins and incorporated to cells by endocytosis. After that, the complex breaks endosome membrane and transported to cytoplasm. 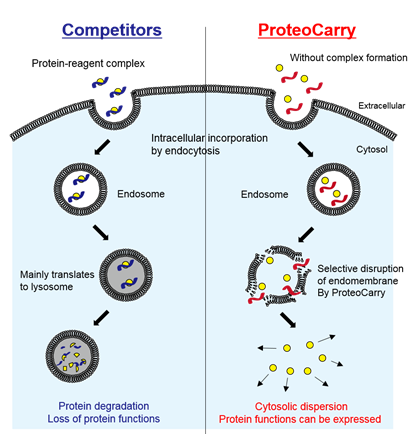 ProteoCarry, a new peptide-base transfection reagent has a strong and selective membrane-disrupting activity. ProteoCarry does not require a forming of protein-reagent complex. Therefore, not only proteins, but also biopolymers can also be transfected to cells.

Transfection protocol
CAUTION
Following protocol is an example for the positive control experiment, FITC-dextran.
Transfection efficiency is highly affected by protein’s profile such as molecular weight and net charge, celltype, and confluency of cell. To obtain best results, please optimize condition for your experiments.
Cell preparation
Cells are seeded and allowed to reach up to 80% confluency in 24 hours.
Memo
Confluency of cultured cells may be influence on transfection efficiency. Please optimize cell
number for each experiment.
Transfection
1- Mix reagents according to the following table (= Transfection mixture).
Table 2 Suggested amount of transfection mixture
Memo
You can choice serum-free, serum-supplemented media or PBS as the basal medium of protein
transfection. Delivery efficiency through ProteoCarry is not affected by serum (<10% FBS). In some
cases, PBS give the best results. Please select a basal medium according to your cells of tested.
2- Remove culture medium, wash cells with PBS twice and add the transfection mixture prepared above.
3- Culture cells in the transfection mixture at 37oC for at least 1 hour. The incubation time for the best delivery efficiency is depends on proteins. Please optimize incubation time.
4- Remove culture medium, wash cells with PBS twice and add fresh medium containing serum and culture cells for appropriate time for your experiments. Cells can be used for following applications