Bionanocapsule (BNC) ZZ is a hollow nano-size particle expressing antibody-binding proteins on the surface. Because it binds most antibodies by simple mixing it can be used as a probe for antibody detection. Since BNC itself has an ability to penetrate cells, BNC-ZZ can be also used as a component for DDS carrier targetable to various cell using cell-specific antibodies.

The BNC-ZZ is a type of bionanocapsule (hepatitis B virus surface antigen expressing hollow nano-particle) that can easily bind with desired antibodies by simple mixing, and developed for the purposes that 1) recognition and delivery of desired cells using the specificity of antibody against cell surface antigen such as receptors, and 2) easy-to-use detection tool of antigen-antibody complexes.

Basic type of BNC (BNC-L) is composed of L-protein of hepatitis B virus surface antigen which is floating on the particle made from lipid bi-layer. The BNC itself has ability to deliver its content into cytoplasm. Among three regions of L-protein, BNC-ZZ expresses zz-tag amino acids sequence in Pre-S1 region, the outmost region. Because zz-tag binds Fc region of antibodies, BNC-ZZ can binds to antibodies without affecting the antigen recognition site.

Thus, BNC-ZZ can be used for, depending on the antibody used, cell-specific DNA delivery in vitro, detection of antigen-antibody complex by using pre-labeled BNC-ZZ, and other applications.

2. Antibody- specific cellular transfection by DNA
Mehods
Plasmid DNA was first mixed with a cationic liposome to form a DNA-liposome complex. The DNA-liposome complex was then mixed with BNC-ZZ to make a DNA-liposome-BNC-ZZ complex. To the complex, anti-EGFR antibody (mouse monoclonal) was mixed to form the transfection complex. The complex was applied on Gli36 cells (a glial cell line, expressing abundant EGFR on the cell surface), and GFP expression was observed 72 hrs after application.
Result
As seen in below photos, GFP expression was seen in cells applied the complex attached with EGFR antibody-attached complex, but not with no antibody

Note
A similar antibody-specific transfection was succeeded in PC-12 with NGFR, MDA-MB453 with EGFR, A431 with FGFR and others. To achieve the antibody-specific transfection using BNC-ZZ, the choices of liposome and antibody species, and the composition ratio of BNC, liposome and antibody are critical. So to get better result, we strongly recommend taking screening processes to optimize these factors.

3．Simultaneous and multiple detection of proteins using fluorescent-labeled BNC-ZZ
Mehods
Four types of protein were separated by SDS-PAGE, and transferred to membrane from the gel. BNC-ZZ was separately labeled with 4 types of Cy dyes, and each Cy dye-labeled BNC-ZZ was incubated with one of the four antibodies that binds to the proteins. Thus, each fluorescent labeled BNC-ZZ forms a fluorescent probe that recognizes one of the four proteins. The protein-transferred membrane was simultaneously incubated with all the four types of probes in the same buffer. The Cy dye was detected using fluorescent detector at wavelengths corresponding to each Cy dye and graphically merged.
Result
As seen in below photos, four proteins (vimentin, GST, tublin, and actin) can be immuno-stained simultaneously without using second antibodies. The system has also an great advantages since same type of antibody, such as mouse IgG1, can be used for detecting multiple proteins. 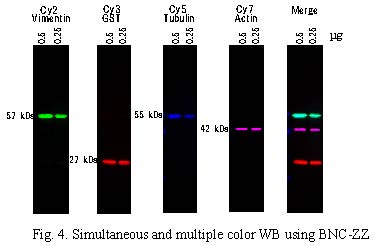 Note
For performing this detecting system a kit is available on request. The kit is composed of BNC-ZZ (pre-labeled, or user labeld), blocking agents, and a detailed protocol.
References