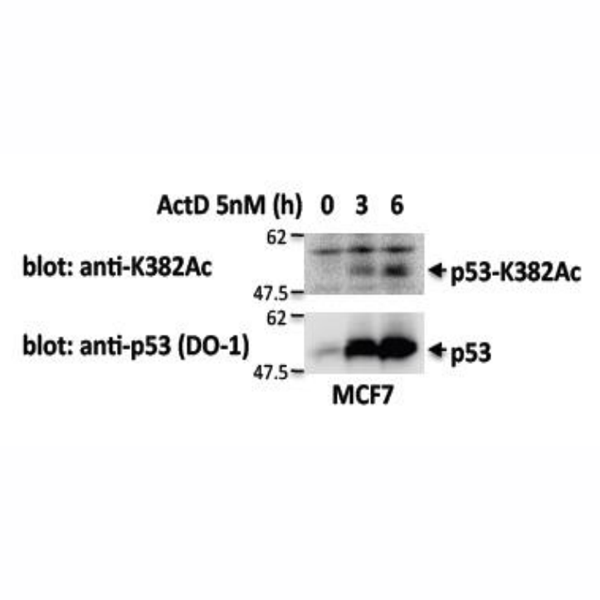 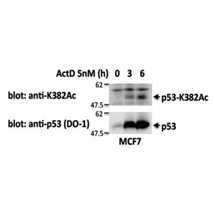 p53 mutants are found in more than half of human cancers and are considered as the most important human cancer related gene. p53 is detected at 53kD position by electrophoresis and is composed of 393 amino acids. In the unstressed normal cells, the p53 level is low and it is inactive. However, with stress, especially with DNA damage, it is activated to promote arrest of cell cycle and repair of DNA damage, or induction of apoptosis. The functions and stability of p53 are regulated by phosphorylation of serine and threonine, and acetylation of lysine at various sites in the molecule. Acetylation of lysine 382 (acetyl-K382) of p53 occurs after DNA damage and is catalyzed by the p300/CBP acetyltransferase, which stabilizes p53 proten (ref 1).

p53 protein was first described in 1979 and ten years later identified as a tumor suppressor protein. It is approximately 53 kDa and contains 393 amino acids that comprise several functional domains. It consists of an acidic N-terminus with a transactivation domain, a hydrophobic central DNA-binding core and a basic C-terminus with regulatory and oligomerisation domains. Upon sources of cellular stress such as damaged DNA, p53 protein is stabilized and activated via post-transcriptional mechanisms, and this leads to cell cycle arrest and DNA repair or apoptosis.

As just described, activation of p53-mediated transcription is a critical cellular response to DNA damage. p53 stability and sitespecific DNA-binding activity and, therefore, transcriptional activity, are modulated by post-translational modifications including phosphorylation and acetylation. p53 is phosphorylated at several serine residues within its amino- and carboxy-terminal domains and is also acetylated at lysines within the carboxy-terminal portion of the molecule.